Want to find an unexpected hidden gem in Italy?  Visit Matera.  Want to wander aimlessly through cobblestone streets, never ending stairs, eat and sleep in caverns, pretend like you are in Jerusalem, delve into history, throw your iPhone in the air and take breathtaking photos? This is your place. 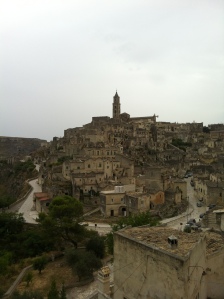 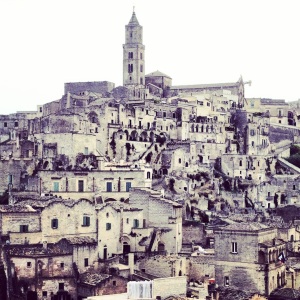 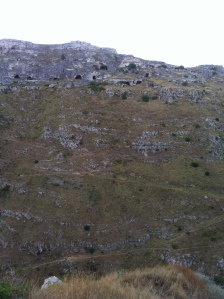 Matera is a city in the region of Basilicata in Southern, Italy. This region is one of the least known for tourists. It is a city that dates back to the 3rd century, Palaeolithic era. It is one of the oldest dwelling cities around in history. The city  is known for it’s “sassi di Matera” stones of Matera.  The city is built along a ravine river named “La Gravina”. The houses are actual cave dwellings that were dug into.  The stairs, rooves, wall, etc. are made of the stones. Many houses are  piled on top of each other. The city has an eerie smlilarity to Jerusalem. Many movies have been filmed here used as the “Jerusalem” setting.  Mel Gibson’s famous movie, The Passion of the Christ, was filmed here.

Matera has been a World Heritage Site UNESCO, since 1993.  It is recognized for “Most Outstanding Intact example of an old settlement”. It was originated by the Romans in the 3rd century. During the 1950’s all of the Matera residents were forced out of the sassi into the new section because of rampant poverty and the spread of Malaria. During this time large families were living without electricity in small one room caves. Around the late 198o’s Matera began to be revitalized. Many restaurants, pubs, luxury cave hotels, and residences are beginning to thrive.  The Italian government along with the funding from assistance of the making of movies aided in the revitalization. 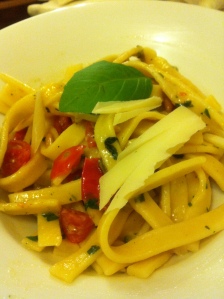 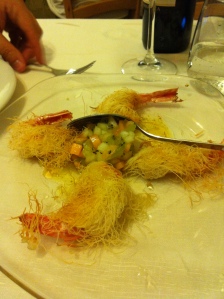 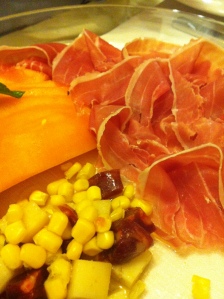 Antonio and I were driving from Milan to Calabria, where his family resides, and we needed to find a place to stay for the night. After seeing a picture posted on Facebook of Matera, I knew it was a place I wanted to visit so I told Antonio, “Let’s stay here!”  It’s not easy for most people to get to, but since it was somewhat on our route and we had a car, it was easy for us.

We were confused when we first arrived. The new part looks like a typical Italian town. We then parked the car and walked into the main town square which also looked like a typical Italian square. To our surprise, the town square had been transformed into a music festival with many popular Italian musicians.  So much for feeling as though we were in the times of Jesus!

As we were heading to our dinner reservation (we found online), I glanced between an alley and over a balcony a glimpse of a lit up city. I shouted at Antonio who didn’t hear me and I ran over to the lights. Sure enough, it was the “sassi di Matera”. I was in utter awe.

Luckily for us, the restaurant had the exact same view for us to gaze at that evening.

San Biagio Ristorante  www.sanbiagioristorante.it  I highly recommend this restaurant as the location with the view is unbeatable, it’s situated in a restored cave, the service was very personable to us and of course the food was delicious.  We ordered a wine from the nearby region Puglia, a Primitivo which was strong with a full bodied spicy flavor. One glass is almost enough! Our appetizer (antipasto) was the selection/variety of appetizers.  We were shocked when the waiter brought out five different types of specialty appetizers.  We still had our main course!!! Afterwards we joined the rest of the Matera citizens and enjoyed the concert.

The next morning we immediately went to the tourist information booth.  We were able to gather a wealth of  helpful knowledge, maps, and must see places to walk and visit. Be prepared for a lot of walking and stairs and wear comfortable shoes.

For sure, I will be returning to this charming and mysterious one of a kind city. This trip was a stopping place for the night and day. As I was able to get a feel for the city, I recommend at least 48 hours!  Next time, I would like to go for one of the bike rides that has a variety of intenaries  to see all angles of Matera.  I’d also like to spend more time in the many cathedrals througout the city. The guided walking tours through the caves and paths are highly recommended.  And of course, I ‘d love to spend more time dining with a historic view “La bella vita“. 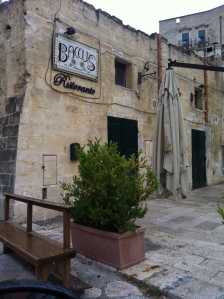